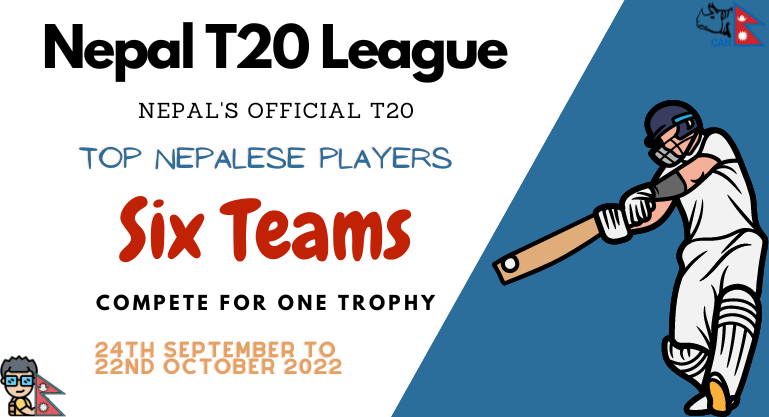 Nepal’s official Nepal T20 League is starting in September and will end in October 2022; Seven3sports PVT LTD. to organise this league.

Cricket Association of Nepal founded this league in 2022 in hopes of growing Nepali Cricket. They believe this tournament will provide Nepali cricketers with the opportunity to play and gain playing experience with international players.

This league has been officially recognized as Nepal’s Official T20 League by both CAN and ICC. The Sports Council of Nepal has also approved it.

International sports management company Seven3Sports secured in as a ‘Strategic and Commercial Partner”. They will help CAN organize a top global level event in Nepal.

Seven3Sports is a leading sports company that had associated with Big Leagues like IPL and FIFA World Cup among many others. The company is also committed to promoting Nepali Cricket at grass root level.

They will pay CAN a heafty money of IC 330 million over eight years span. So, the Cricket Association of Nepal will get an average of 41.25 million per year.

The Tribhuvan University Cricket Stadium will host all the matches of the Nepal T20 league.

The Registration of the Nepali Players was open from 27th to 31st August 2022, and the draft was released on 10th September 2022.

You can see the Marquee players bought by all 6 teams in this league.

Currently, no information has been published by the CAN. But the league is scheduled from 24th September to 22nd October 2022.

The league will be played in Double Round-robin and playoffs format.

There is a total of six teams participating in this cricket league. All the Nepal T20 Leagues’ teams and marquee players are on the table below.

There is no news on which TV channel and youtube channel (probably) will live stream and telecast the league.

How many teams are playing in Nepal T20 League?

There are a total of 6 teams from 6 different cities in this first edition of the Nepal T20 League.

No, Sandeep Lamichhane was planning to play CPL in West Indies. Also, CAN suspended him.

When will Nepal T20 League start?

The tournament is set to start on 24th September and end on 22nd October 2022.

Will International players play in this tournament?

Yes, the point of this T20 cricket league is to give Nepali players the opportunity to paly with and against them.