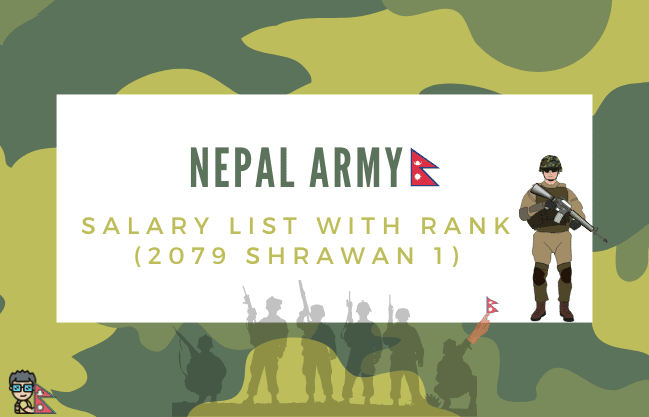 Have you ever wondered what is Nepal Army Salary is? How much do they earn, and what different ranks are there in the Army?

Did you know that the Nepali Army was known as the Gorkhali Army and the Royal Nepali Army?

It was officially renamed to Nepali Army after the Nepali Civil War on 28 May 2008, after the abolition of the Shah dynasty.

The current highest rank in the Nepal Army is General Prabhu Ram Sharma, also known as Chief of Army Staff (COAS), who took over the position on 9 November 2021.

He is the successor to Purna Chandra Thapa, who was previously General of the Nepal Army (9 September 2018 – 9 September 2021).

Note: There are certain criteria you have to fulfill if you want to join as an Army Officer in Nepal directly.

READ: How to Join as Officer Cadet in Nepal Army (Education, Physical, Written and other requirements)

Other Nepal army ranks and salary

This is all the information I’ve gathered on Nepal Army Salary with the rank updated on 2079 Shrawan 1. If you wish to know more then, please visit their official website, they have listed everything you need to know.

What is the Nepal army second lieutenant salary in Nepal?

Which is the highest post and salary in the Nepal army?

Nepal army’s top rank is COAS General, with a starting salary of Nrp 77,211.

What is starting Salary of the Nepal army?

A Recruit in Nepal army has starting salary of 24,702.