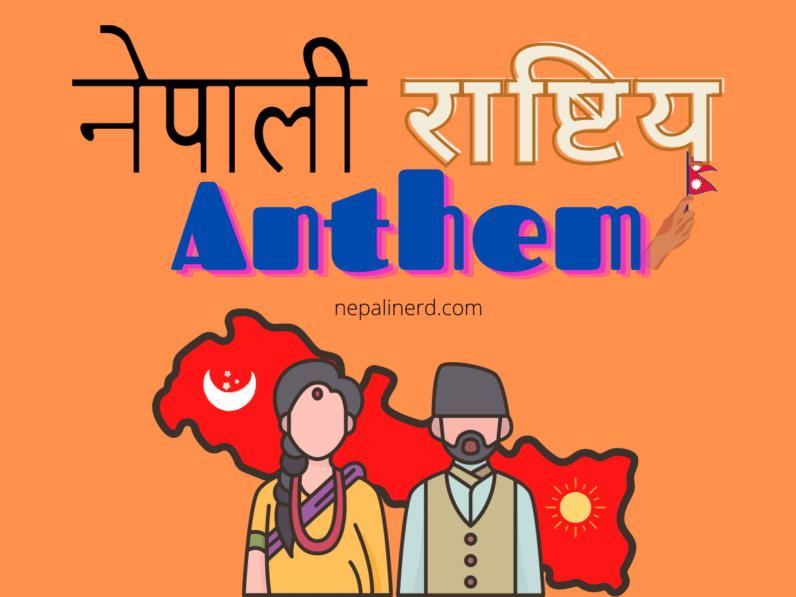 Without a doubt, the national anthem of a country is one of the best and most favorite songs for every individual. For us Nepalese, there are two of them.

Sayaun Thunga Phoolka and Shreeman Gambhir Nepali both of these are our national anthems of Nepal but one of them was replaced in 2007.

This is the current national anthem that the Nepalese people sing and feel in every important event be that in Sports, Inauguration, Important events, etc.

The current national anthem of Nepal was written by Byakul Maila while the music was given by Amber Gurung in 2007 and this anthem was adopted by Nepali on 3rd August 2007. Leaving behind the previous song “Shreeman Gambhir”.

We Nepalis, from different lingual, racial, religious, or cultural backgrounds are the individual flower of a whole garland of the Nepali race. We have always been sovereign and we are spread out from our territories of Mechi to Mahakali.

Blessed with Nature’s millions of gifts and blessed by the blood sacrificed by our Heroes, we are independent and immovable – standing still with pride.

Nepal – the land where knowledge shines, the peaceful nation consisting of Terai, Hills, and Mountains – is indivisible. It is our beloved motherland and we shall preserve its sovereignty at any cost.
A melting pot of diverse races, numerous languages, and religions, Nepal is rich in its large diverse culture. We are a progressive people of the progressive nation and we don’t look back – Jai Nepal!

According to Wikipedia “Chakrapani Chalise,” 1924 wrote our first national anthem. Which was adopted in 2007. Then it was replaced by our new and currently in use national anthem of Nepal “Sayau thunga phulka”

Even though it was written in 1924 this song was finally adopted and acknowledged officially in 1962. There is two verse that you might not know, you can check the other part on this website.

Why was New National Anthem Created in Nepal?

After the abolition of the monarchy in 2006, a new national anthem signified a new era in the history of Nepal.

Who wrote the national anthem of Nepal?

Byakul Maila is the writer of the current Nationa Anthem of Nepal, “Sayaun Thunga Phulka“. His lyrics were declared as a new anthem replacing the previous “Shreeman Gambhir” for the newly declared the Federal Democratic Republic of Nepal. Byakul Maila was born on January 1, 1973.

Who composed the national anthem of Nepal?

Amber Gurung, Born and raised in Darjeeling is a legendary Nepali musician who is the composer of Nepal’s national anthem. He has composed more than 1000 songs.

Who is the writer of the old national anthem of Nepal?

Chakrapani Chalise is the writer of the old national anthem of Nepal, “Shreeman Gambhir” which was our Rastriya Gaan from 1962 to 19 May 2006.

Composer of the old national anthem of Nepal

The old Rastriya Gaan which was adopted in 1962 was composed by Bakhat Bahadur Budhapirthi born in 1899.